Lover of history chronicles restoration of cabin on Lake Wandawega 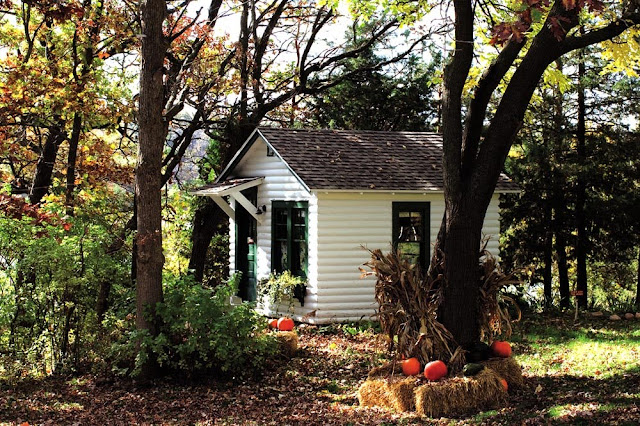 The 1920s-era cabin Tereasa Surratt and her husband, David Hernandez restored was transported nearly 300-miles from central Illinois to Sugar Creek Township. The cabin became the subject of Surratt’s book, “A Very Modest Cottage.” Photo courtesy Tereasa Surratt.
SUGAR CREEK TOWNSHIP — Growing up in Beardstown, a small rural community in west-central Illinois, Tereasa Surratt, 37, rode the bus to school. Every day during that hour-long ride, she passed two 12- by 12-foot wooden cabins, remnants of 1920s-era motor hotels.
With each passing year, she saw the cabins’ deterioration spread: peeling paint, rotting sills, broken windows.
“You shouldn’t have these emotional attachments to buildings when you’re a child, but it was sad to me when I was little,” she said.
She long pondered rescuing one of the cabins, even after she had moved to Chicago.
“When we visited her family, we always stopped there (at the cabins),” said David Hernandez, Surratt’s husband. “You could tell she had designs in her head.”
Over the past 60 years, the cabins had morphed into storage shacks for their owner, who operated a family-run trucking company on his property. As luck would have it, the land abutted the home of Surratt’s grandmother.
Not only did Surratt and her family know the owner, but one of her brothers had worked for the man for years. In 2006, Surratt bought one of the cabins from him for $500 and talked her husband and brother into moving it to a 25-acre property the couple owned on Lake Wandawega in Sugar Creek Township
The experience became the subject of “A Very Modest Cottage” written by Surratt and put out by Sterling Publishing Co. Inc. The book, released in April, has garnered attention from Chicago magazines to National Public Radio.