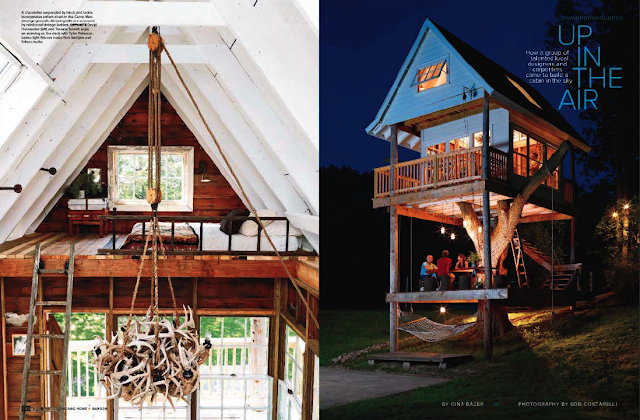 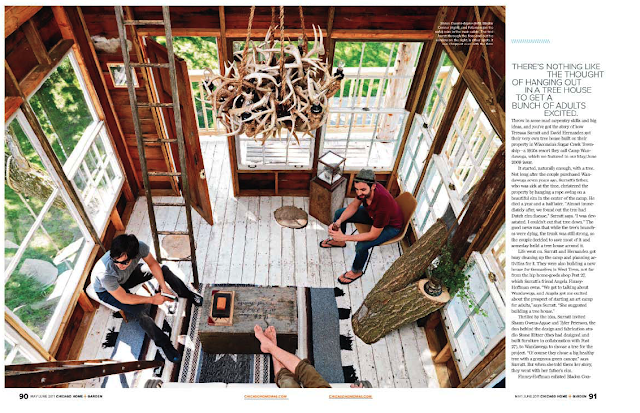 check the story out here: http://tinyurl.com/3kgpudr

There’s nothing like the thought of hanging out in a tree house to get a bunch of adults excited. Throw in some mad carpentry skills and big ideas, and you’ve got the story of how Tereasa Surratt and David Hernandez got their very own tree house built on their property in Wisconsin’s Sugar Creek Township—a 1920s resort they call Camp Wandawega, which we featured in our May/June 2009 issue.

It started, naturally enough, with a tree. Not long after the couple purchased Wandawega seven years ago, Surratt’s father, who was sick at the time, christened the property by hanging a rope swing on a beautiful elm in the center of the camp. He died a year and a half later. “Almost immediately after, we found out the tree had Dutch elm disease,” Surratt says. “I was devastated. I couldn’t cut that tree down.” The good news was that while the tree’s branches were dying, the trunk was still strong, so the couple decided to save most of it and someday build a tree house around it.

Life went on. Surratt and Hernandez got busy cleaning up the camp and planning activities for it. They were also building a new house for themselves in West Town, not far from the hip home-goods shop Post 27, which Surratt’s friend Angela Finney-Hoffman owns. “We got to talking about Wandawega, and Angela got me excited about the prospect of starting an art camp for adults,” says Surratt. “She suggested building a tree house.”

Thrilled by the idea, Surratt invited Shaun Owens-Agase and Tyler Peterson, the duo behind the design and fabrication studio Stone Blitzer (they had designed and built furniture in collaboration with Post 27), to Wandawega to choose a tree for the project. “Of course they chose a big healthy tree with a gorgeous green canopy,” says Surratt. But when she told them her story, they went with her father’s elm.

Finney-Hoffman enlisted Bladon Conner, Steven Teichelman, and a handful of other carpenter/furniture-maker friends, and they all started sketching out plans. “Everyone had a radically different idea, and everyone was thinking 100 times bigger and more elaborate than I was,” Surratt says. “I was imagining a little kid’s house. The things they were coming up with were like castles in the sky.”

Ultimately they settled on a three-level cottage in which the tree comes through a deck near ground level, then breaks through the floor in three spots on the first level of the house. At two of those points, sturdy arms of the tree were sawed level with the floor; a third arm pierces the floor and extends out a window. They had to break out glass to slide that window down around the tree’s arm in order to install it; they needed a bucket truck—the kind electricians use to work on power lines—to do this. (Luckily, Surratt’s brother is a lineman.) From the peak of the vaulted ceiling to the base of the enclosed part of the structure is 16 feet; two sleeping lofts, reached by ladders, are perched up high, front and back. It’s not so much a tree house as a cottage on stilts, or, as Surratt explains, “four telephone posts set six feet into the ground into concrete pilings, surrounding a tree. We built this to be as sturdy as our city house.”

The materials they used aren’t just run-of-the-mill two-by-fours, either. The windows are vintage, and most of the wood is reclaimed, some from a dilapidated dairy barn near the property, the rest from a demolished Chicago bungalow, sourced from the ReBuilding Exchange (rebuildingexchange.org). Once the structure was built (“It took about a year of these guys coming up on weekends and often working 15-hour days,” says Surratt), Surratt and Finney-Hoffman went to work on the interior, furnishing it sparely but cozily with vintage pieces. Accessories include everything from pillows made out of old flour sacks to luggage scored at a flea market to out-of-print books about Wisconsin history and birdwatching (all in a tan, gray, and yellow color palette, to complement the bark on that all-important tree).

As for the swing that Surratt’s father hung on the elm? It remained up throughout the construction of the tree house and is still there. Looking back, Surratt marvels at how the project came together.

“It’s rare to find folks so selfless that they would literally build you a cabin in the sky and ask for nothing in return,” she says. “And these folks aren’t your average builders, but amazing, visionary designers. It’s humbling beyond words.”