david found it in a friends garage.
buried in dust.
hadnt been started in years.
it was like a time capsule.
it was my mothers day present.
and it cost less than a nice watch or road bike. 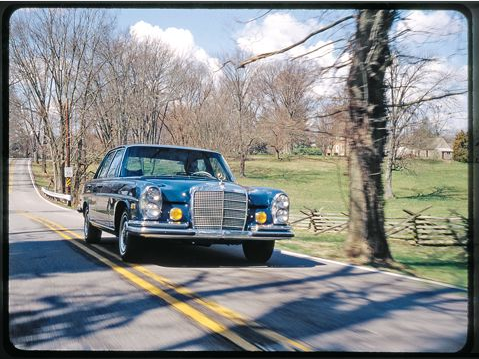 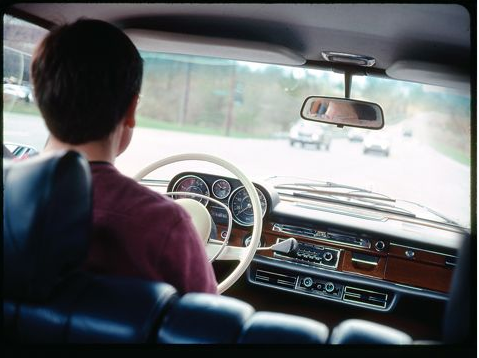 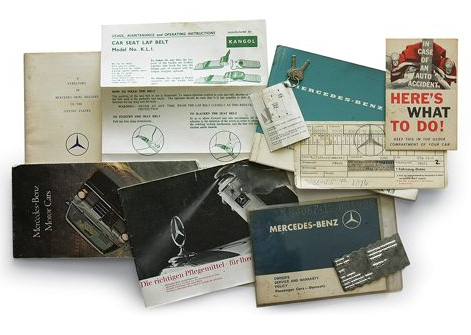 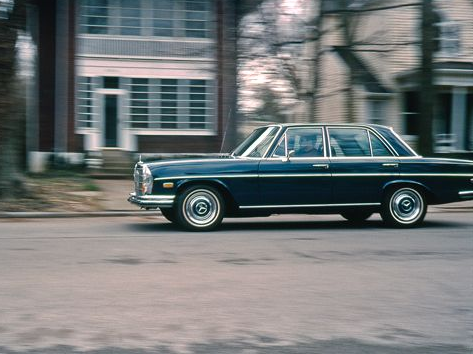 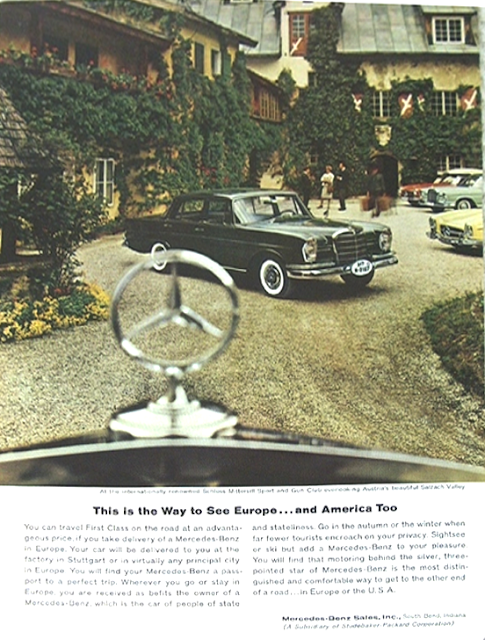 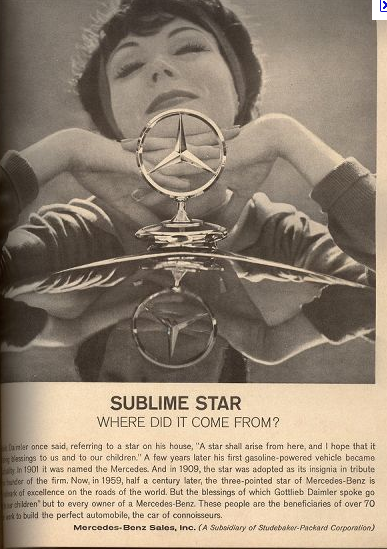 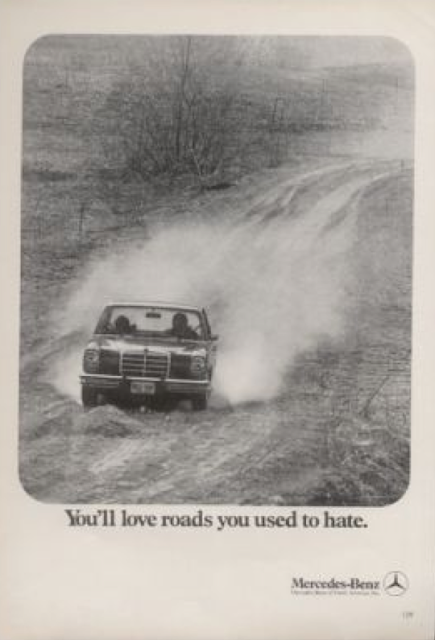 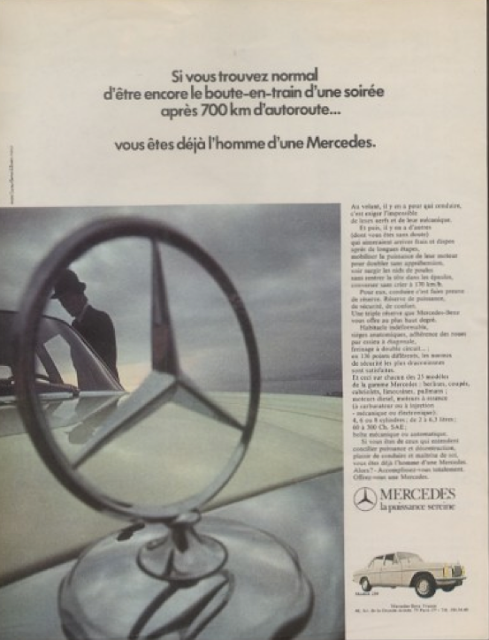 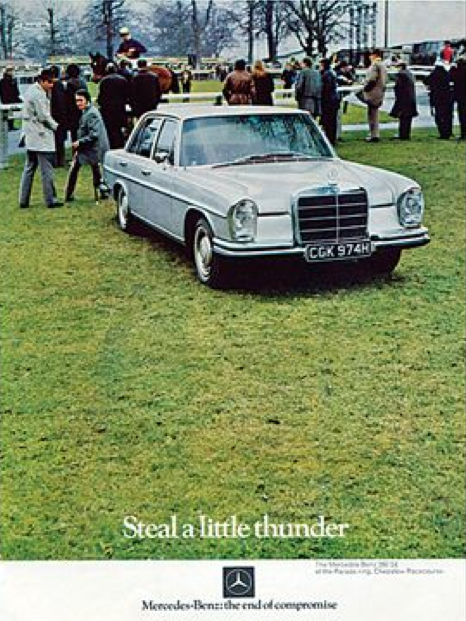 this car cost us less than my friend’s 10speed.
really.
so in honor of this uber-cheap new ride,
ive been trying to dig up whatever we can find:
vintage ads. old reviews. an original commercial!
– here’s story featured in Automobile Magazine:
Listen up, all you children of the modern era:
Believe it or not, there was a time when Mercedes-Benz didn’t build outwardly exciting cars.
Forget the Mercedes-Benz SLR McLaren and its 207-mph top speed. With a few notable exceptions (here’s to you, 300SL Gullwing), prior to 1980, street cars from the three-pointed star looked about as pulse-tingling as a bowl of cold grits.
Nevertheless, in many ways, we miss the Mercedes-Benz of old. Unhindered by the demands of marketing mavens, horsepower wars, or any real competition, Stuttgart spent the 1960s and early 1970s in a gloriously focused bubble. Its cars were designed and constructed with engineering considerations – not price or market niche – first. Styling came almost as an afterthought, an indifferent nod to the foolish whims of the outside world. What resulted were some of the most understated, well-rounded, and capable cars the world had ever seen.
The 1972 Mercedes-Benz 280SE 4.5 – the period equivalent of today’s S-class – is perhaps the best and most attainable example of Stuttgart’s golden-age greatness. Internally designated W108, the big four-door first came into the world in 1965 powered by a 146-hp, 2.5-liter six-cylinder and was dubbed 250S/SE. In time-honored Mercedes-Benz fashion, the following six years saw the W108 receive a host of different six-cylinder powerplants, a long-wheelbase variant (code-named W109), coupe and convertible body styles, and no fewer than three different overhead-cam V-8s.
That said, all you really need to know is this: in 1972, the engine swapping came to a head. That year, Stuttgart gifted the short-wheelbase, four-door W108 with V-8 power – a 230-hp, 4.5-liter unit derived from the 3.5-liter engine first seen in the 1970 280SE coupe and convertible. This combination, sold stateside for only one model year, offered the best of both worlds, pairing the nimble chassis of the short-wheelbase model with some of the thrust of the 300-hp, long-wheelbase, $15,000 300SEL 6.3. What once was a plodding, low-powered autobahn cruiser had morphed into a torque-packed sport sedan with all-day-long, 125-mph legs.
On modern roads, surrounded by modern cars, a 4.5-liter 280SE is something of an enigma. It’s that rarest of beasts – a big, old sedan that simply doesn’t feel that old. The light, stiff doors shut with an endlessly solid, safelike whong that echoes a little through the interior. The fuel-injected V-8 lights off after a moment of cranking and then settles down to a smooth, almost imperceptible idle. Switches and latches feel heavy and substantial; the dash-mounted, key-shaped headlight switch chunks into position like a household circuit breaker. The stark interior is an exercise in restraint, a sparse combination of short-loop carpet, thin pillars, and unapologetically simple, well-trimmed surfaces.
It’s an odd reminder that the word “luxury” once meant something very different to Europeans – it was more of a mind-set about build quality than an endless supply of deep-pile carpet and butt-massaging seats.
Our 110,000-mile, one-owner test car suffers from slightly tired shocks and suspension bushings, but you can still crank it down the highway at an easy 100 mph with two fingers on the wheel. Most amazing, the 280SE does a surprisingly good imitation of a modern car. It’s torquey and relatively quick, it stops well, it handles like a car half its size, it’s comfortable over long distances, and it’s quiet on the highway. At high speeds, you’re met with a slight wind rush from the A-pillars, a restrained rumble from under the hood, and a relentless, quiet urge from somewhere aft. You want for nothing, save a long, fast stretch of highway. Or maybe a reason to drive to the south of France.
Mercedes would continue to build cars without compromise for some time, but the pressures of profit margins and burgeoning competition put an end to the engineering-at-all-costs approach in the early 1990s. The 280SE 4.5 sedan offers the best of the big-inch, classically upright Benzes, only with little of the associated repair and maintenance costs common to the more iconic long-wheelbase cars (air suspension, for example, was standard on the 300SEL, and it is neither cheap nor simple to repair). Prices are absurdly low, and good drivers can still be found for about $5000. And while parts and service costs are relatively high, you can take consolation in one thing: no matter the buy-in, greatness rarely comes cheap.
Year Produced: 1972
Number Produced: 13,527