years ago, the Chicago Tribune did a story on Camp Wandawega, and soon after, folks starting coming out of the woodwork to tell us stories of visits to our little camp in their youth…
one such gentleman came to visit and came bearing some old super 8 film-
check it out here
another family brought us stacks of old photographs…
their grandparents took over the place in the 40’s, then their parents owned it in the 50’s…
before it was finally sold to the catholic church (the latvia marion fathers)-
who turned it into the summercamp that david attended.
here are some of the photos they brought to us…. 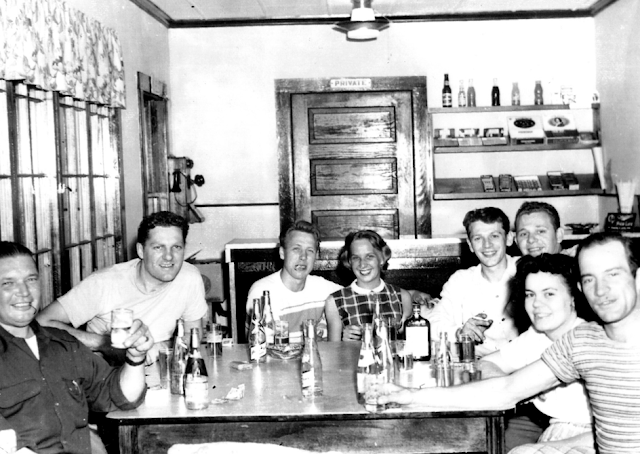 this is the old bar that sat where the diningr oom is. you can still see its base in the floor now. as we still have the tables and chairs. 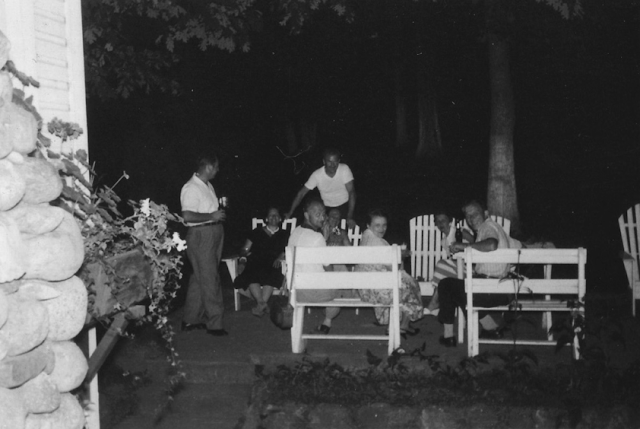 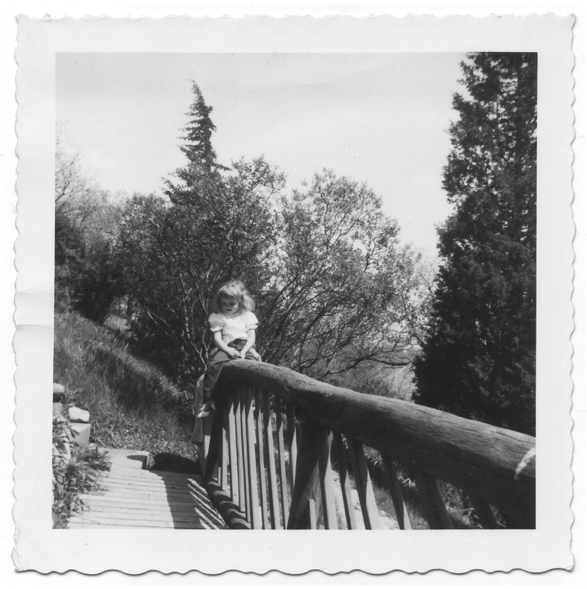 this is celeste. she is the one who came to visit and bring us the photos– here she is perched on a boardwalk railing (just outside the three bedroom cabin) that is now long gone… but you can still see the steps in the background, leaving down to the lake, which are still intact. 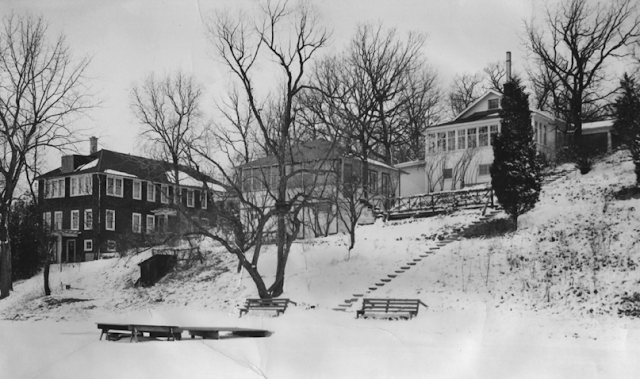 the view from the lake in the winter. it is pretty much unchanged. (except those two benches, that i now want to recreate) 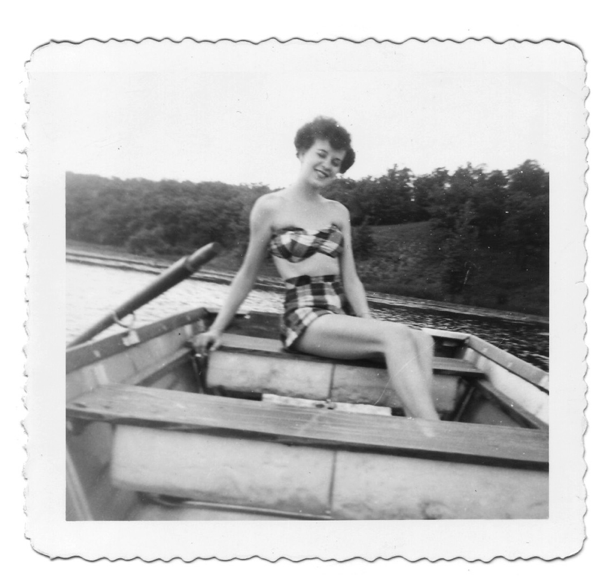 this is Celeste’s lovely mother. taken on lake wandawega. she died quite young, just after the birth of her kids. 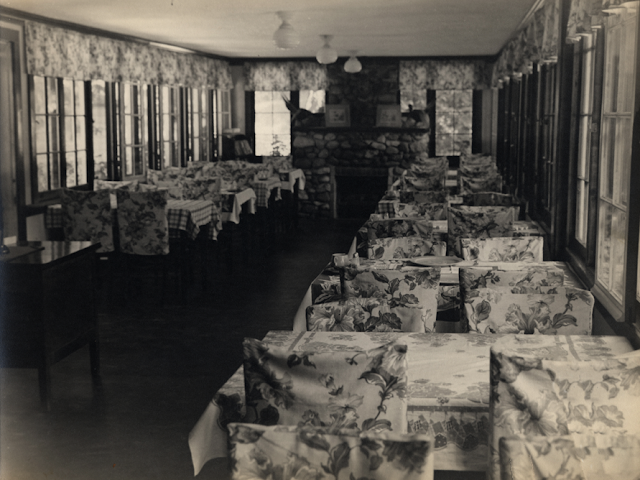 this picture was taken in the late 40’s — the lodge is still the same— (except its no longer a diningroom). we found all of this barkcloth in the attic in boxes. they swapped out the patterns for different seasons.  chair back slips, tableclothes, curtains, table runners– its was the best find ever. 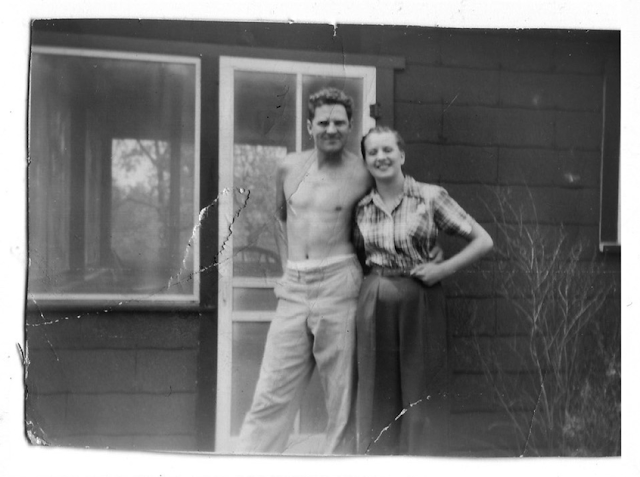 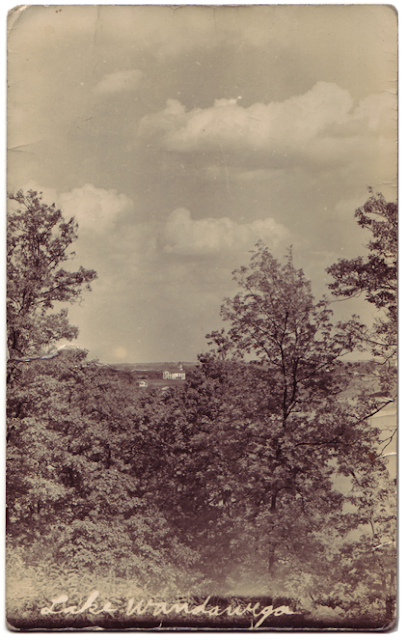 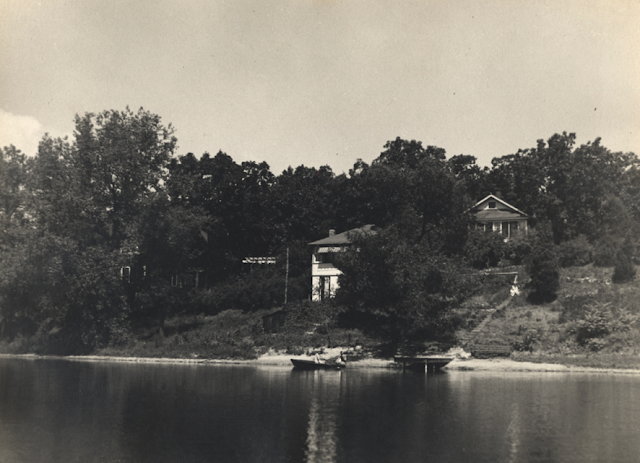 this is Celeste’s dad on the left. my favorite shots. i have become obsessive about using only vintage v-hull aluminum boats since we saw this shot… 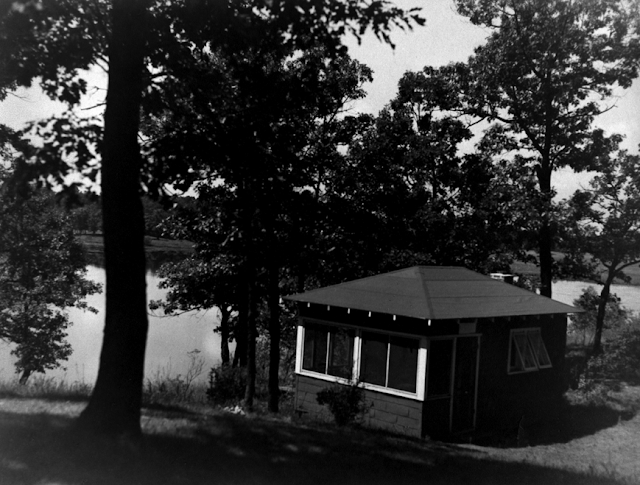 another view of the cedar cabin. 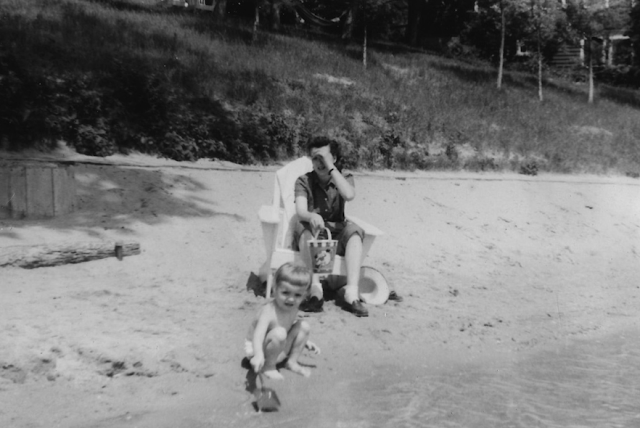 this photo is how we discovered that the beach was so much bigger &  had a retaining wall. 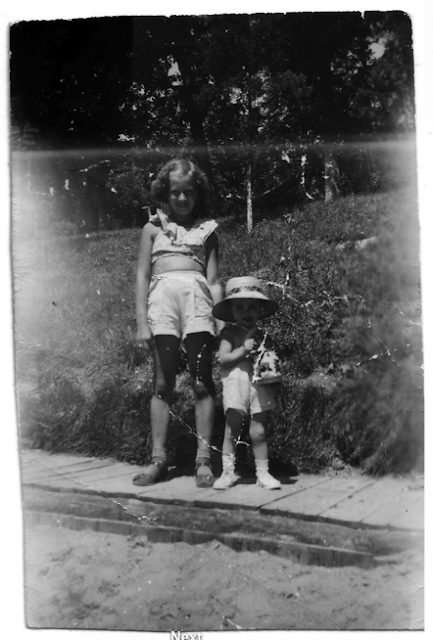 — it even had a boardwalk. which we’ve since rebuilt (found one on craigslit that was a dock and repurposed it) 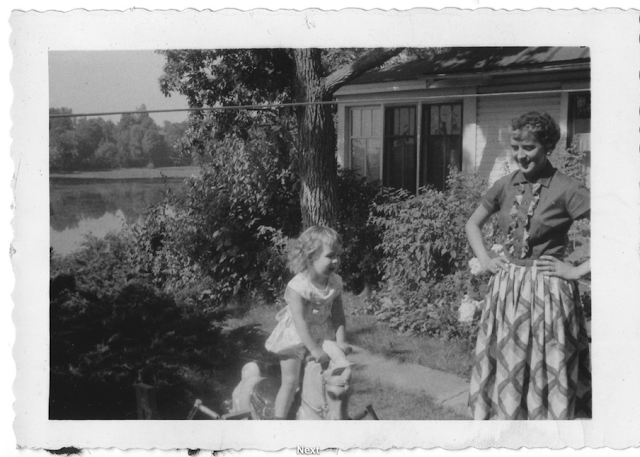 this is the view from the perspective of standing just outside the chapel door. the tree is still there, but considerably bigger. (check out her dress! love it.) 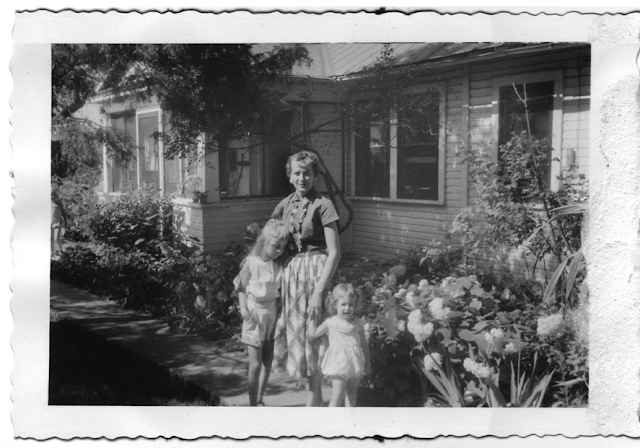 this was once the main entrance. which is now the chapel. 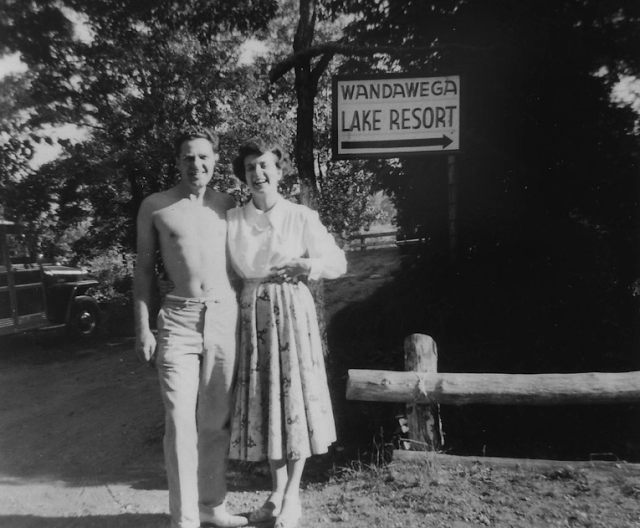 …standing in front of the main entrance sign (when we found this, we had it recreated to match as well)
check out the woodie in the background— wish we had one. 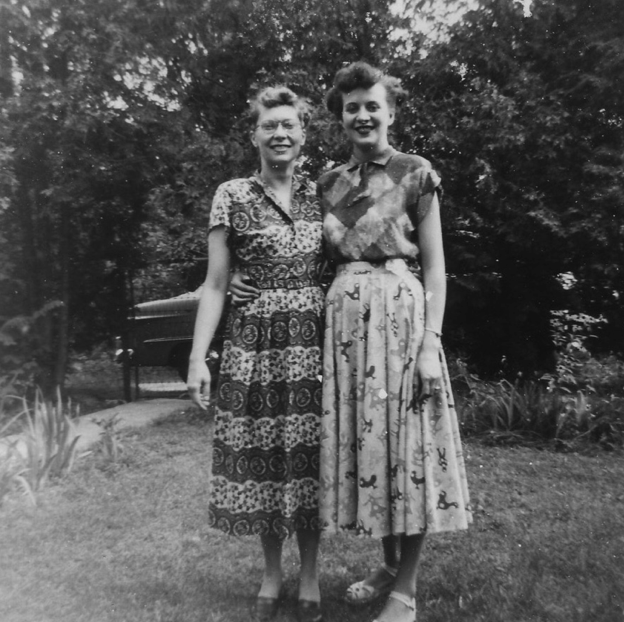 — standing where the altar now sits. the little metal gate is since gone- the sidewalk still remains. 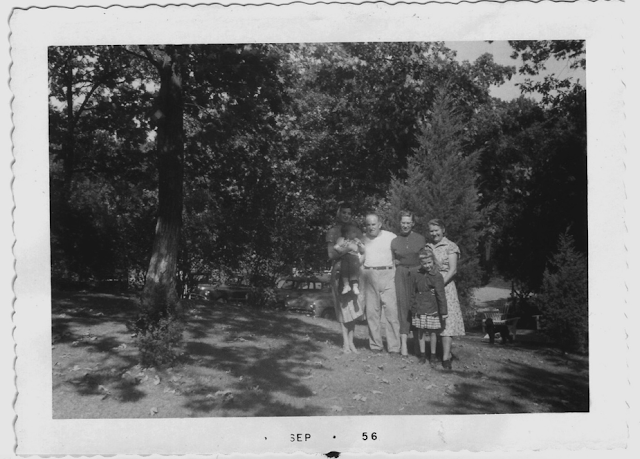 hilltop perch– everything is the same… except the black poodle. dont know where he is. 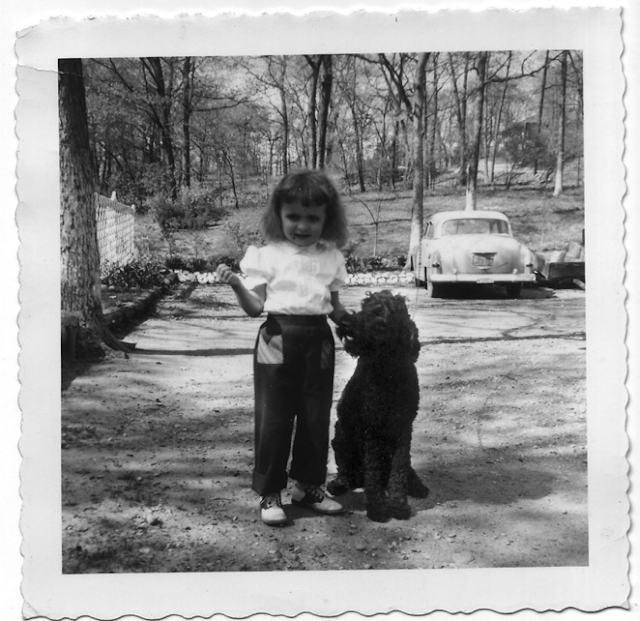 from what we can see, it looks like there was once a parking lot which is now the sports field. (i just noticed a row of stones defining the edge of the lot- i am going to go see if can find those and re- expose this wknd…. (check out her saddle shoes.) love. thanks so much to sam and celeste and her family for sharing the pics!!