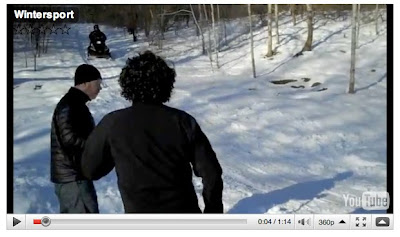 our good friend sammie spratlin posted such a great recap of one of the recent parties, we just had to include the whole thing here. enjoy.

CHECK OUT HIS VIDEO HERE:
http://www.samspratlin.com/talk/

At least once a winter I try to make it out to the Northern edges of civilization to engage in some brisk wintersport activity. This weekend, we headed to dear ol’ Wandawega for fun and sun and snow and ice.

I had volunteered to help Kyle in the preparation of enchiladas for a dinner, so Friday night I stayed up late frying pork and roasting peppers. Bethie was unpleased with the smells, but she got over it. Saturday morning she hatched a little plan whereby she could ditch me and go shopping at the outlet malls, so Kyle was nice enough to drive me and John up there.

We hit that ice running…

10:00 AM – Biscuits and gravy courtesy of Mary and Alexei followed by a snowmobiling tutorial with Dave.

2:30 PM – Exploratory committee formed to evaluate the strengths of various sledding spots around the premises. We settled on the 4-wheeler path up into the trees. Initial testing concludes that a large ramp would be needed at the bottom of sledding hill.

3:00 PM – With the aid of two snow shovels, a trashcan full of water and a bottle of whiskey, work commences on our snow ramp.

4:00 PM – Construction of the “That Guy That Died Doing Luge At The Olympics Commemorative Snow Jump” is officially unveiled – most of the whiskey is gone.

6:00 PM – As with most wintersport days, by the time the jump is officially finished, the sun is setting and we are all pretty wiped out. We freshen up a little bit and get the oven heated up for Noche de Enchiladas! While we wait, we pass the time playing left-right-center and Bethie and I cleaned up at that.

8:00 PM – Enchilada night goes off without a hitch. I was kind of nervous because I had really thrown mine together of the top of my head. I was actually writing down what I was doing as I was doing it so I’d be sure not to forget a step, but they turned out really great. I made a carnitas-style pork enchilada with red sauce and a roasted green chile, spinach and cheese enchilada with a sour cream and green sauce. The roasted chile one turned out SO good.

I was also nervous that I’d be facing some stiff competition with Kyle filling the other half of the enchilada order, but when he offered up enchiladas rolled with flour tortillas my trepidation eased a little bit. They were great – don’t get me wrong – but flour?! Come on, now.

10:00 PM – We make one last check of our snow jump and sled down that hill at night. Then we were officially done with our day of wintersport.