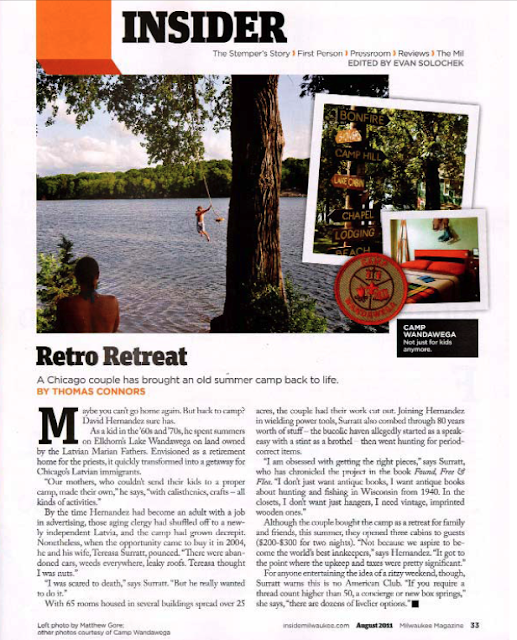 Milwaukee magazine did a nice little peice on Camp Wandawega this month.
check it out:
“RETRO RETREAT”

A Chicago couple has brought an old summer camp back to life.
by Thomas Connors

aybe you can’t go home again. But back to camp?
David Hernandez sure has.
As a kid in the ’60s and ’70s, he spent summers
on Elkhorn’s Lake Wandawega on land owned
by the Latvian Marian Fathers. Envisioned as a retirement
home for the priests, it quickly transformed into a getaway for
Chicago’s Latvian immigrants.
“Our mothers, who couldn’t send their kids to a proper
camp, made their own,” he says, “with calisthenics, crafts – all
kinds of activities.”
By the time Hernandez had become an adult with a job
in advertising, those aging clergy had shuffled off to a newly
independent Latvia, and the camp had grown decrepit.
Nonetheless, when the opportunity came to buy it in 2004,
he and his wife, Tereasa Surratt, pounced. “There were abandoned
cars, weeds everywhere, leaky roofs. Tereasa thought
I was nuts.”
“I was scared to death,” says Surratt. “But he really wanted
to do it.”
With 65 rooms housed in several buildings spread over 25
acres, the couple had their work cut out. Joining Hernandez
in wielding power tools, Surratt also combed through 80 years
worth of stuff – the bucolic haven allegedly started as a speakeasy
with a stint as a brothel – then went hunting for periodcorrect
items.
“I am obsessed with getting the right pieces,” says Surratt,
who has chronicled the project in the book Found, Free &
Flea. “I don’t just want antique books, I want antique books
about hunting and fishing in Wisconsin from 1940. In the
closets, I don’t want just hangers, I need vintage, imprinted
wooden ones.”
Although the couple bought the camp as a retreat for family
and friends, this summer, they opened three cabins to guests
($200-$300 for two nights). “Not because we aspire to become
the world’s best innkeepers,” says Hernandez. “It got to
the point where the upkeep and taxes were pretty significant.”
For anyone entertaining the idea of a ritzy weekend, though,
Surratt warns this is no American Club. “If you require a
thread count higher than 50, a concierge or new box springs,”
she says, “there are dozens of livelier options.” n 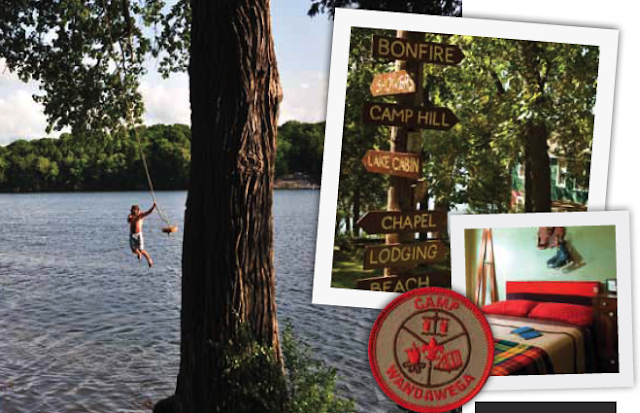